In 2012, the legacy Jewish Hospital HealthCare services (JHHS) hospital operations were merged with the former Saint Joseph Health System in Lexington to form KentuckyOne Health. As a result of the merger, the JHHS name was changed to the Jewish Heritage Fund for Excellence to reflect the organization’s evolved mission. 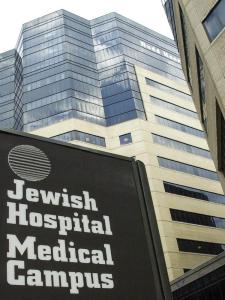 The merger positively impacted JHFE’s ability to improve and enhance community health, fund medical research and provide support to the local Jewish community. Approximately $70 million was retained from the legacy organization to be used primarily for those purposes.

As a result of the merger, JHFE is also a sponsor of and provides governance oversight for a variety of health related organizations, including:

The Jewish Heritage Fund for Excellence traces its history back to the original founding of Jewish Hospital in Louisville in 1903 when a group of prominent Jewish businessmen met and founded a hospital to provide health care for poor immigrant Jews and to create a non-sectarian institution that would treat both paying and nonpaying members of the entire community and provide a setting where Jewish physicians could practice medicine, pursue research and treat patients.

In the decades following the founding, the original vision flourished through a partnership with the University of Louisville School of Medicine. Together, the two organizations invested in a wide range of medical research that collectively improved health care in Kentucky and around the country. as a result, the Jewish Hospital organization grew into a nationally recognized organization that contributed, with UofL, a number of medical first in the world, nation and region.

In 2005, the Jewish Hospital HealthCare Services organization partnered with Catholic Health Initiatives to form Jewish Hospital and St. Mary’s HealthCare. This unique partnership evolved further in 2012 when a second merger between the two organizations created KentuckyOne Health, the largest not-for-profit health system in the Commonwealth of Kentucky.

As a result of the KentuckyOne Health merger, the Jewish Hospital HealthCare Services Board of Trustees reorganized into the Jewish Heritage Fund for Excellence, a grant making organization focused on supporting medical research and education and continuing the original founders’ vision to support the Louisville Jewish community.

Get to know the JHFE Staff and Board of Trustees.